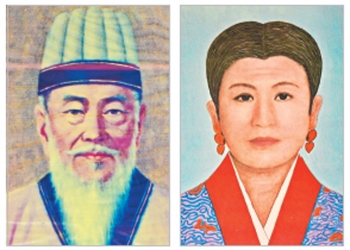 Park Jesang (363 – 419/425 estimated) was an official of Silla during the reign of King Nulji (reigned 417-458). Jesang’s story is documented in Samguk Yusa, one of the main ancient texts of history, mythology, and stories of Korea’s earliest nations. He is also the author of Budoji, a text often described as “the Genesis of Korea.” Budoji: A Tale of the Divine City of Ancient Korea is currently being prepared for publication in English by my micropress, Alpha Sisters Publishing.

This particular tale of Park Jesang is a translation of his story in Samguk Yusa, authored by Il Yeon in 1281, during the Goryeo dynasty.

In the year 390, the king of ancient Japan sent a diplomat to the king of Silla, King Naemul.

“Our king has great respect for your divine abilities and asks that you send one of your princes to Japan as a sign of gratitude,” the diplomat said. So King Naemul sent his third son, Mihae, who was just 10-years-old. The Japanese king kept Mihae hostage for 30 years.

Then, in the year 419, three years after his oldest son took the throne as King Nulji, the king of Goguryeo sent a diplomat to Silla with the message, “Our king has heard your younger brother, Bohae, is bright and talented. He would like to build a friendship with Silla. Please send your brother to visit, as emissary.” King Nulji heard this and felt it a good diplomatic move, so he sent his younger brother to Goguryeo. This time, the king of Goguryeo kept Bohae hostage and did not return him.

In the year 425, King Nulji invited his officials, heroes, and warriors to the palace, where he hosted a party featuring a feast and musicians. After three rounds of rice wine and other alcohol, music began to play. Listening, the king teared up, telling his officials, “While my father ruled with good intentions, thinking only of his own people, he sent his dear son to Japan in a gesture of gratitude and never saw him again. He passed into death without ever reuniting.”

King Nulji continued, “Then, when I became king, the neighboring country of Goguryeo had such a strong military who never stopped warring with us that when they sent word seeking our friendship I trusted their word and sent my younger brother to Goguryeo. They, too, kept my brother hostage and haven’t returned him. Oh, what I wouldn’t give to see both brothers again! Together, we could perform ancestral rituals at my fathers altar. This would be such a blessing!”

Gazing at his officials, he questioned, “I wonder who can make this happen?”

The officials said, “Certainly, this is not an easy task. We need someone with intelligence, cleverness, and courage. Only someone with such attributes could make your hopes possible.”

After some thought, the officials spoke again, “We believe that the local official of Sabra province, Park Jesang, is the right choice.”

So the king called Jesang into his quarters and made his request. After bowing twice, Jesang answered, “I have heard that if a king has worries, then it causes strife for those who serve him. If the king is disrespected or shamed then those who serve him must die. If I first measured whether the task you have presented me with is difficult or easy, before making my commitment, then I would be neither a brave nor loyal servant. If I first think about whether I’ll live or die before deciding to take action, then I will have made my decision without courage.”

Park Jesang paused, before speaking again. “Although I do not consider myself worthy enough, I would like to honor your wishes and return your brothers to you.” King Nulji felt moved by Jesang’s words and poured him rice wine. Together they drank  and King Nulji clasped Jesang’s hands when saying goodbye.

Jesang immediately went to Goguryeo as an emissary, meeting Prince Bohae to discuss his escape. On May 15, as they planned, he waited for the prince at the Gosung pier. As part of their plot, the prince feigned illness for a few days prior, remaining inactive in his quarters. That night, he escaped to the beach. When the King of Goguryeo discovered his absence, he sent many soldiers to capture Bohae once again. However, the prince had been kind and generous to the soldiers while living as a hostage, so the soldiers pitied him, sparing him by shooting arrows without heads. In this way, prince Bohae was able to return to Silla unharmed.

When King Nulji saw his brother Bohae again, the thought of his other brother Mihae arose as well, making their reunion a bittersweet one. . With tears in his eyes, King Nulji said “ It is as if I have a body with only one arm and one eye. Whilst I have regained one, I still don’t have the other and this saddens me.”

Once Jesang heard this he left the palace once again, not even returning home to see his own family before embarking upon his second quest. Instead, he went straight to the pier of Yulpo in order to leave for Japan, to retrieve the second prince. When Jesang’s wife heard this, she ran out of their house and followed him on horseback, however, when she arrived at the pier her husband was already on the boat. She cried and called his name sadly, yet her husband only waved at her as the boat set sail for Japan.

Jesang arrived in Japan, announcing to Japan’s king, “The King of Silla killed my father and brothers, who were innocent of any crime, so I have come here to seek refuge.” It was a cunning plot and the King of Japan believed him, offering Jesang a house to live in comfortably. Living there, Jesang often accompanied Prince Mihae to the beach to hunt birds and fish. Each time he caught anything good, he made an offering of his catch to the Japanese king. The king enjoyed these offerings and never doubted Jesang’s loyalty.

One day, when the early morning fog was so thick that one could not even see their hands held in front of their face, Park Jesang told Prince Mihae, “Now you are ready to leave.”

“Then let us go together,” Prince Mihae said.

But Jesang replied, “If I go with you the Japanese will know of our plot and follow us. I wish to stay here, preventing suspicion and delaying their pursuit of you.”

“You have become like a father and an older brother to me. How could I leave you and return alone?” the prince replied.

Jesang said “If I could save your life to appease King Nulji and heal a brother’s heart, then that is enough for me. How could I wish for anything more in my life?” Then, Jesang poured wine for Prince Miihae, sending him off to his escape, accompanied by another official of Silla. Then, Park Jesang waited inside Prince Mihae’s room, to see what would unfold.

The next morning, Japanese officials arrived to visit Prince Mihae. They were greeted by Park Jesang instead, who prevented them from entering Prince Mihae’s room, saying, “Yesterday the prince did so much hunting and running around, he is too exhausted to get up and host visitors.” In the afternoon, the officials grew curious and asked again., Then, Park Jesang replied, “The prince left a long time ago.”

The officials ran to tell the King of Japan, who sent soldiers on horseback to chase after Prince Mihae, but they were not able to catch him.

The King of Japan imprisoned Park Jesang, asking, “Why did you secretly return the prince to his homeland?” Jesang said, “I am a servant of Silla, not a servant of Japan. I only meant to follow my king’s order. I have nothing more to say to you.”

This angered the King of Japan, who said, “You were already acting as my servant, and now you betray me by saying you are still a servant of Silla. You will be harshly punished unless you admit that you will now live as a servant of Japan. If you swear your loyalty to me, I will reward you with a position and prize.”

But Park Jesang replied, “I would rather be a dog or a pig of Silla than become a servant of Japan. I would take the harshest punishment in Silla before accepting a position and a salary from Japan.”

The angry king then ordered the bottom of Park Jesang’s feet to be stripped of skin, making him walk on the sharp edges of cut reeds. He then asked again, “Whose servant are you?”

Jesang replied “I am a servant of Silla!”

Furious, the King of Japan then stood Jesang on top of a burning hot iron and asked, “Whose servant are you?”

Jesang replied, “I am a servant of Silla!”

At this, the king realized he could not break Jesang, and burned him to death on the island of Mokdo.

When Prince Mihae returned to Silla, King Nulji and his brother Bohae received him at the pier. The three brothers returned to the palace to hold a feast in celebration, and King Nulji ordered a broad pardon across the nation, to celebrate. He gave Park Jesang’s wife the title of The Great Mother of the Nation and arranged for Jesang’s daughter to marry Prince Mihae.

When Park Jesang’s wife heard the news of his leaving for Japan, without first returning home, she stood at the edge of the sea and wailed with sadness for her husband for a long time. After this, people renamed the beach The Never-Ending Cry Beach. Even long after her husband’s death, Park Jesang’s wife often climbed to the top of Chisulryeong Mountain with her two daughters, to weep in the direction of Japan. It is said that she died on that mountain top, still and crying, and turned into a stone.

Translator’s Note: The shrine for Park Jesang’s wife may have still been intact at the time Samguk Yusa was published in 1281 CE, but the shrine no longer exists in modern Korea. However, the sacred stone still remains. Today, visitors and tourists to the area will find a new memorial built to honor Park Jesang and his family.